Hacked Roblox accounts are telling people to vote for Trump 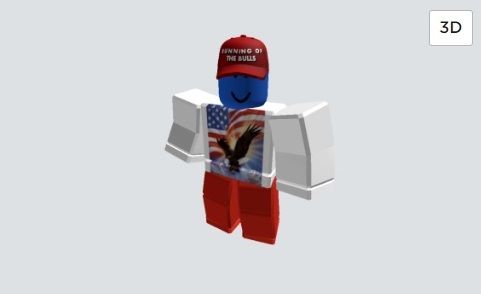 Roblox has become the unlikely target of pro-Trump propaganda. The White House is up for grabs again this year, and even a game played predominantly by children under 16 has been unable to escape the impending US election.

Spotted by the BBC, some Roblox accounts have been hacked and transformed into Trump bots, sending other players pro-Trump messages. While Trump’s candyfloss hair, bright orange skin and love of McDonalds might appeal to children, they can’t vote, so the messages instead tell them to ask their parents.

Whoever is responsible has gone the extra mile, even dressing up hacked characters in red caps evocative of the MAGA cap, a t-shirt with an eagle and the US flag, and red, white and blue colour schemes. Profiles have also been edited with slogans, and searching for profiles using “Ask your parents to vote for Trump this year!” generates a huge list.

Some players have posted the messages sent by the Trump bots and screenshots of their Trumpified characters on Twitter. As well as telling players to get their parents to vote Trump, the messages contain links to scam sites—so it’s unlikely a sincere effort to create more Trump voters, though nothing could surprise me now.

this is unacceptable i never gave out my information to anyone i don’t go on to roblox for like 5 days and o get hacked. 1 i don’t like trump. 2 how ever did this is messed up cause you are talking to little kids and taking their information too. i did not know about this until- pic.twitter.com/vtbyZW1afTJune 26, 2020

This has been going on since last week, but the problem persists. Targeting kids with propaganda from Trump or any politician is pretty troubling, even if no parent is going to change their vote based on what their kid heard on Roblox, but the greater risk comes from the links to scam sites that could exploit more vulnerabilities.

Unrelated, but there’s also a weird number of Trump-themed Roblox accounts on Twitter.