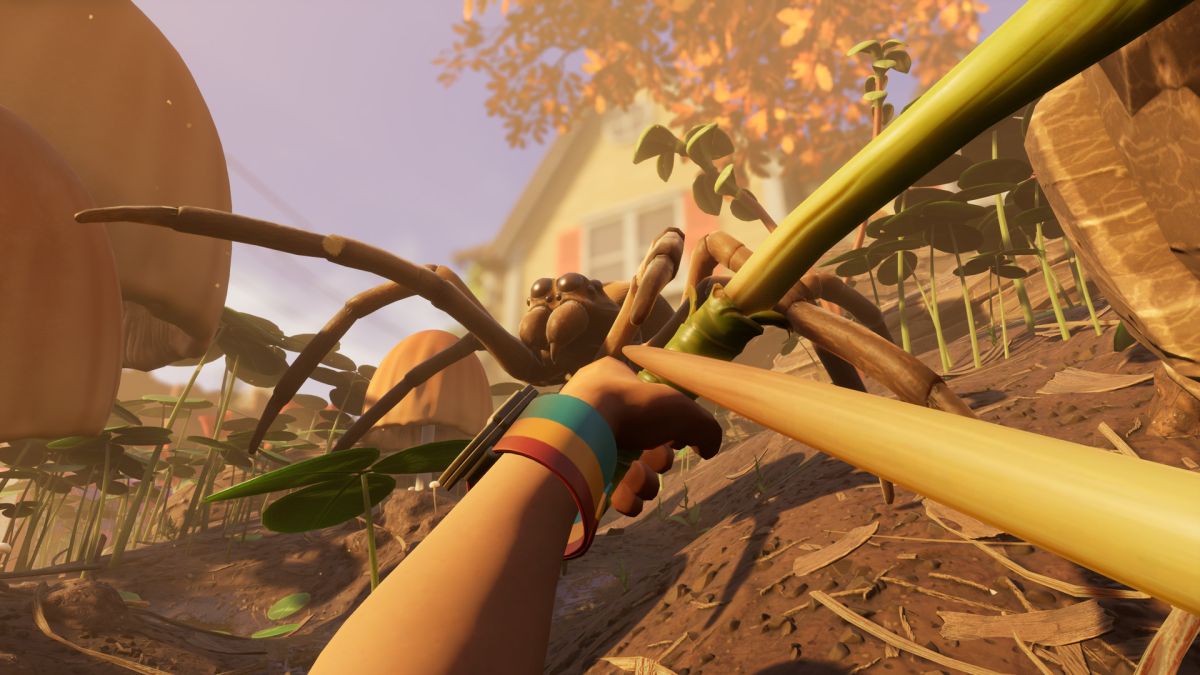 When I first heard about Grounded, it was hard not to think of custom-made rat maps for games like CS:GO, where instead of playing in a town you’re running around in a living room. In rat maps, players are very small, so coffee tables are the size of buildings and chess pieces can be used as cover.

Rat maps can be a cute gimmick, but don’t really provide anything new except a different perspective. I kinda wondered if Obsidian’s survival game, where players are the size of ants and trapped in someone’s backyard, would wind up just being a survival game played on a rat map—cute for a while, but not really compelling.

And Grounded, now in Early Access, is mostly filled with standard survival game stuff. Instead of trees, you chop down grass. Instead of boulders, you’re mining pebbles. Instead of wolves or bears, you’re battling spiders and stink bugs. Build a base, craft armor and weapons, find and cook food, and explore the yard. Pretty familiar stuff.

But there are a few welcome twists to the formula. Grounded is a beautiful looking game, and the towering blades of grass really do make you feel like you’re in a dense forest. Despite it being a backyard there are still different biomes, like fields of dead grass (which can be harvested for different crafting options than living grass), spooky underground caverns, and even a toxic zone (possibly due to a human-sized human spraying pesticides near their house). And it’s neat to find a vantage point where you can gaze across the world and be reminded that the entire yard is maybe 30 feet across instead of a mile.

Finding clean water, rather than the stagnant kind you can drink from dirty puddles, is pretty cool, too. Dewdrops the size of your head cling to the end of blades of grass, and since the grass towers way over your head it seems difficult to reach them for a drink. But you can hit that blade of grass with a tool or your fist, and the bead of water will wobble and fall to the ground so you can slurp it up. It’s a neat touch.

And there’s something great about every day objects not just existing in the world but having a new significance because you’re so very small. Finding a discarded and empty soda can isn’t just a visual gimmick: you can build a base inside it and live within its protective aluminum walls. If you come across a plastic breath mint case and you’ve crafted the right type of hammer, you can actually mine that delicious mint as a resource.

And there’s some novelty in crafting armor from things like clover and acorn caps, or crafting arrows from thistles. I can’t say it’ll remain all that novel after dozens of hours of play, but initially it really helps freshen up familiar survival systems.

Bugs, love them or hate them, are very wonderfully done in Grounded, from the scurrying and squeaking little green aphids to shiny, lumbering ladybugs (I hope we’ll be able to saddle and ride them) to the busy, mostly neutral soldier ants—they won’t attack you unless provoked but they will absolutely steal stuff from your storage baskets, and I’m pretty sure I caught a few trying to eat some bug meat I was roasting on a spit over my campfire.

Then there are the fearsome spiders. You might get some advance warning before a spider encounter: Some areas are covered with webs, and as a spider stalks through the yard you can see the blades of grass swaying in the distance. Plus, if you run into some baby spiders, there’s bound to be a massive momma nearby. But if you blunder into a spider it’ll pounce on you in a flash and kill you incredibly quickly. Spiders are scary enough when you run into them above ground in bright sunlight, and much worse when you meet them in the darkened tunnel. I wouldn’t want to meet these spiders even if I hadn’t been shrunk down to the size of a jelly bean.

I like that Grounded’s insects are a bit unpredictable. At times I’ve chased off a massive spider with one well-placed throw of my spear. Other times I’ve sunk several spears and arrows into them and they just kept coming. You quickly learn which creatures are always hostile and which aren’t, but you can never tell just how the battle will go.

Grounded has a few problems in Early Access—twice I’ve gotten stuck to the scenery and needed to reload an earlier save. But the biggest issue right now is probably that the story quests only take about 30 minutes to complete, and after that you’re mostly left to your own devices. That’s fine if you’re content with battling bugs, constructing a base, and having freeform fun, but if you want more in-depth questing you’re out of luck at this stage of development and may want to wait until the full release.

A final note: spiders aren’t the most repulsive thing about Grounded. That prize goes to the miniature robot that sounds like Claptrap’s long lost brother. (It’s actually Silicon Valley’s Josh Brener doing the voice, apparently, but it’s still got a heavy dose of the Claptrap filter.) You’ll need the sound on in the gif below to really get the idea. I stand by my violent reaction.