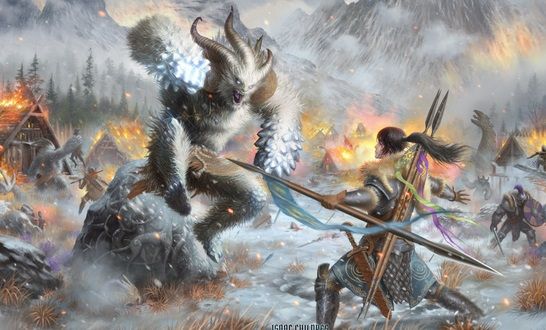 The Kickstarter campaign for Frosthaven, the sequel to the RPG tabletop game Gloomhaven, has raised $5 million in its first day. The project has currently raised ten times its the original target of $500,000.

Gloomhavens designer Isaac Childres launched the campaign on Tuesday, March 31 around 11am EST, and the tabletop hit its targets goal in ten minutes—going on to hit $1 million within the first hour.

Frosthaven is the fourth successful Gloomhaven-related campaign that Childres has launched. The first and second printings of Gloomhaven and it’s expansion, Founders of Gloomhaven, were all funded through Kickstarter.

The overwhelming support for Frosthaven has been driven from the success of Gloomhaven, which has gained much praise since it was first released back in 2017. It’s a co-op RPG where you and a group of friends delve into dungeons battling through a deck of monsters. Your story can change depending on decisions you make during the campaign and when you’ve achieved your character’s goal you can move onto another one. It’s a beast of a game and has a well-deserved spot on our best boardgames list.

Frosthaven will follow the same design of its predecessor, but take place in the harsh northern region of the game’s world. New features in Frosthaven are the replacement of money with resource trading, re-building the town of Frosthaven to attract new characters, and a puzzle book in a strange language that you will need to decipher on your travels. The Kickstarter campaign ends May 1.

If you’re more into your virtual tabletop games, there’s also a Gloomhaven PC adaptation currently in Early Acess that looks quite promising.