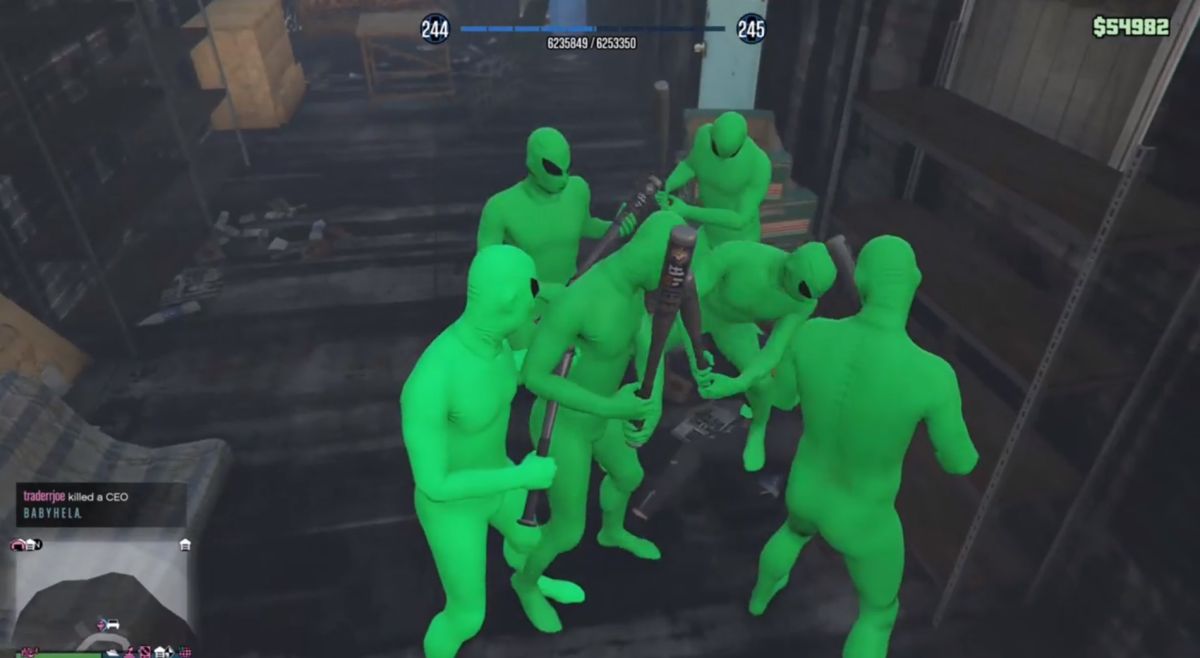 There are quite a few nods to aliens in Grand Theft Auto 5, including a UFO on top of Mount Chiliad, and now it looks like they’ve finally invaded. Gangs of aliens have been terrorising the good people of Los Santos in GTA Online, causing mischief and beating other players to death with baseball bats.

Evidence of these ETs has been popping up online over the last fortnight, proving once and for all that aliens are real and that they’re all dicks.

Here they are beating up a poor man who was just doing a spot of shopping.

They strike again from r/gtaonline

Naturally, they’ve also been abducting people. Nothing as fancy as beaming them up to a UFO and doing experiments on them; instead it’s a rusty van and a beatdown in a trailer.

Our Galactic Invasion Continues from r/gtaonline

We’re learning key details about these aliens from these encounters that will hopefully let us save the planet. For instance, it seems that there’s an alien civil war going on, with Earth as the battlefield.

My crew and I were harassing people in alien suits with pool cues when another crew threw on some suits and challenged us to a classic street fight. Best online moment to date from r/gtaonline

Normally they just sow chaos, picking random targets and kicking the shit out of them, but here they seem to be assisting law enforcement, helping cops take out a gunman. Villains or heroes? You decide.

The Galactic Warfare Continues from r/gtaonline

Despite their advanced bat technology and relentless bloodlust, some victims have been able to get away from their alien attackers, like this fellow, who escaped right into the afterlife by leaping onto a motorway.

Mission failed, we’ll get em next time! from r/gtaonline

I love how this has taken off, inspiring more gangs of naughty ETs. In just a couple of weeks, a weird community of aggressive aliens has sprouted up just because of a goof. It’s ludicrous, but it also mimics real-life trends, like that time people started dressing up as spooky clowns and freaking people out. It’s great.

While these encounters tend to leave players dead, at least they end up with a great anecdote. I bounced off GTA Online early on because getting murdered by someone in a souped-up car with a rocket launcher while I’m just trying do some missions and find some new crime buds isn’t fun, but at least these costumed killers show their victims a good time.