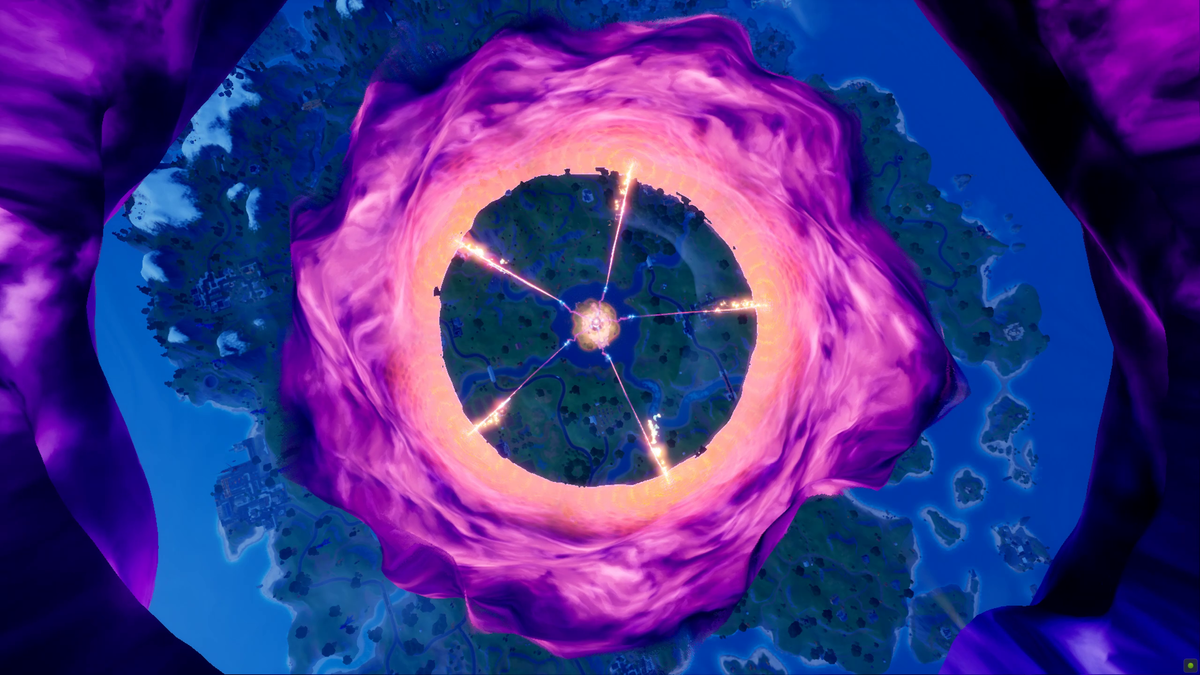 The Fortnite Device event has brought a biblical amount of water to the map, but perhaps not in the way you might have imagined. Instead of raising the water levels, Epic has replaced the traditionally purple electric storm that pushes players towards each other with a giant fish-filled wall of water that you can swim in. We also got a taste of some genuine, honest-to-god lore featuring Jonesy. Fortnite Season 3 is probably going to be a wet one. Here’s how everything went down today.

The event started off in typically bombastic fashion, and followed most of the leaks and threads we’d previously seen from data miners. The five hatches around the Agency rose from the ground to form tall electric pylons, alongside a whole bunch of alarm noises and henchmen dialogue.

Midas’ doomsday device then exploded the Agency, leaving it a smoldering crater. The device, itself a massive pylon with the giant glass electrical ball at the top, rose a hundred yards or so into the air before transmitting electricity to all the pylons.

The electricity emitting from the pylons appeared to shove the purple storm walls back away from the agency while players hovered in the air. However, players were suddenly teleported to a first-person view of a modest office room, with the voices of worried individuals speaking outside. On the table of the office desk could be seen three top secret files featuring Midas, the woman in Midas’ own desk photo, and Lynx, the female cat suit skin character. According to the voices outside the office, something is going wrong with the area around the map.

Players were teleported back to a traditional third-person view of the Agency, where suddenly they were surrounded by a wall of water right out of Moses’ biblical adventure. Fish, whales, and even the Deadpool yacht could be seen floating in the immense body of water.

Players were then teleported back to the first-person view of the office, where it’s revealed that the voice outside your office was none other than Jonesy, the blonde gentlemen featured in plenty of Fortnite trailers and screenshots since the early days.

Jonesy appears shocked to see you, and then asks if you can actually hear him, suggesting something isn’t looking all that normal. Judging from our viewing, it appears that player skins are changed to Midas, so Jonesy must be talking to the gold-handed agent. Weird stuff, and we don’t have many answers, but it’s possible that Season 3 will provide more answers.

As for changes we do know about right now, players were dumped back out to a Storm the Agency match, but now with the same massive wall of water pushing them slowly toward the center.

I took it upon myself to test it out, and you can in fact swim through the “storm” now. It appears like you’ll still take damage, but it’s a cool way to get a little verticality if you don’t have materials to build your way out.

What did you think of Fortnite’s device event? Everything you hoped for? Did it excite you for Season 3 at all? Let us know in the comments.

Don’t forget to check out the rest of our Fortnite guides and news.