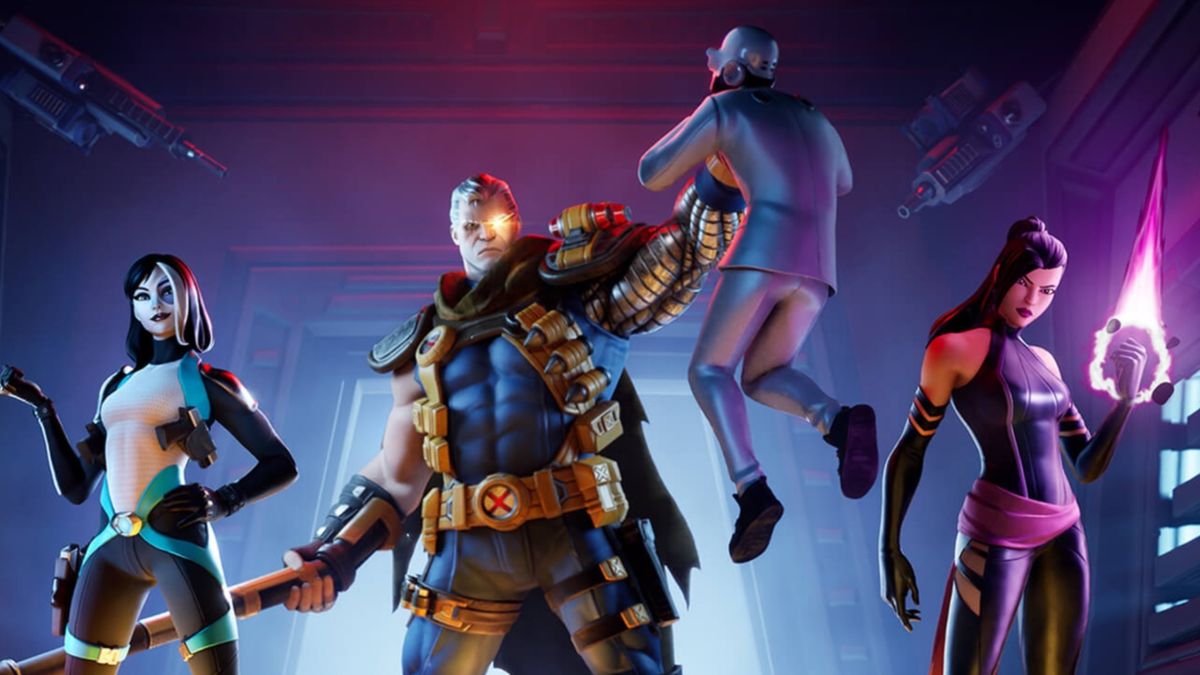 The X-Force Fortnite skin bundle has officially arrived in Fortnite, continuing the battle royale game’s tradition of increasingly bananas brand tie-ins. We’ve been waiting for good ol’ Deadpool and can finally get his classic red skin, as well as his silver X-Force outfit, but what about Cable, Psylocke, and Domino?

The classic X-Force members aren’t being left out in the cold. You can grab them from the Fortnite item shop right now, although it’ll probably cost you a bionic arm and a leg.

The Fortnite X-Force bundle includes the classic white-haired, combat armored Cable, with enough belts and ammo pouches to make even Rob Liefield blush. He’s also wielding a P90 rifle, which I assume gets slotted away when you grab some other weapon in thee game.

True to form, his left robotic eye shines a bright gold hue, and his left arm is nothing but pure steel. Cable’s back bling is a tattered brown cape, a remnant of his time as a time-traveling wayward warrior, and an alternate style with the hood up. He sports a similar look in both the comics and the 2018 movie, where he’s portrayed by Josh Brolin.

Next up is Psylocke AKA Elizabeth “Betsy” Braddock, a mutant with telepathic powers and one of Marvel’s more iconic leading ladies, at least in the comics. She’s sporting her traditional purple and black look that many fans of the comics will recognize, including a purple sash draped around her waist and trailing down her backside. Psylocke’s back bling is a purple katana with an X-Men logo keychain attached.

Finally, you’ve got Domino, who most might recognize as the ridiculously lucky heroine who manages to survive Deadpool’s various pratfalls (including a collapsing freeway), played by the wonderful Zazie Beets. Notably, this version of Domino takes more after the comics, where she’s usually Caucasian. Her back bling is a sort of crystal blue backpack with two attractive pistol holsters.

Unfortunately, Domino’s superhuman luck won’t save you from getting sniped from across the map.

If you buy the X-Force outfits bundle, that will currently run you 3,000 V-Bucks. It looks like Epic will raise that to 4,500 at a late date. You can buy individual skins for 1,500 V-Bucks.

Besides that, there’s also the X-Force gear bundle, which includes three harvesting tools and one new glider.

You’ve got Cable’s Unstoppable Force hammer, which has a really cool shifting metal effect on it.

You’ve got Domino’s Probability Daggers, which look like something I’d pay $600 for in CS:GO.

And Psylocke features the closest thing to a Halo energy sword that we’ll ever get in Fortnite, her purple psi-blade. Seriously, that thing belongs in the arms of the Arbiter.

Psylocke also has a rad glider called the Psi-Rider. It’s basically a giant set of purple butterfly wings, but pointy and pulsing with psychic energy.

The bundle for all those gear items is 2,500 V-Bucks currently, but that will go up to 4,000 V-Bucks soon. Psylocke’s Psi Blade and Glider are both 1,200 V-Bucks individually, while Domino’s daggers and Cable’s hammer are 800 V-Bucks a piece.

Of course, any characters are able to equip these, so no worries if you want to give Cable a giant purple death blade or give Domino a cape.

Don’t forget to check out the rest of our Fortnite guides and patch notes.