For its three-year anniversary, West of Loathing received a patch 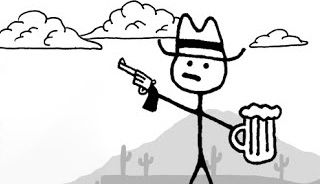 Stick-figure cowboy adventure West of Loathing was our pick for best comedy game of 2017, thanks to its impressive descriptions of horrifying spittoons, silly-walking protagonist, and spot-on parody of RPGs. Three years later it’s received a new patch from developers Asymmetric, which addresses what they’re calling “obscure bugs” as well as adding even more jokes.

Extra wandering pedestrians with new things to say have been added to a couple of settlements and there’s a fresh character to talk to at Clooncy’s in Frisco, as well as “Additional nonsense” added to the Gun Manor in the Reckonin’ at Gun Manor add-on. You can read the full patch notes here, but I’ve stolen a few of the highlights for you.

This patch is already available for the Steam version, and will roll out for other versions once it’s been tested for stability because it also updates the game to a new version of Unity, but that’s not as funny as the thing about the dictionary.