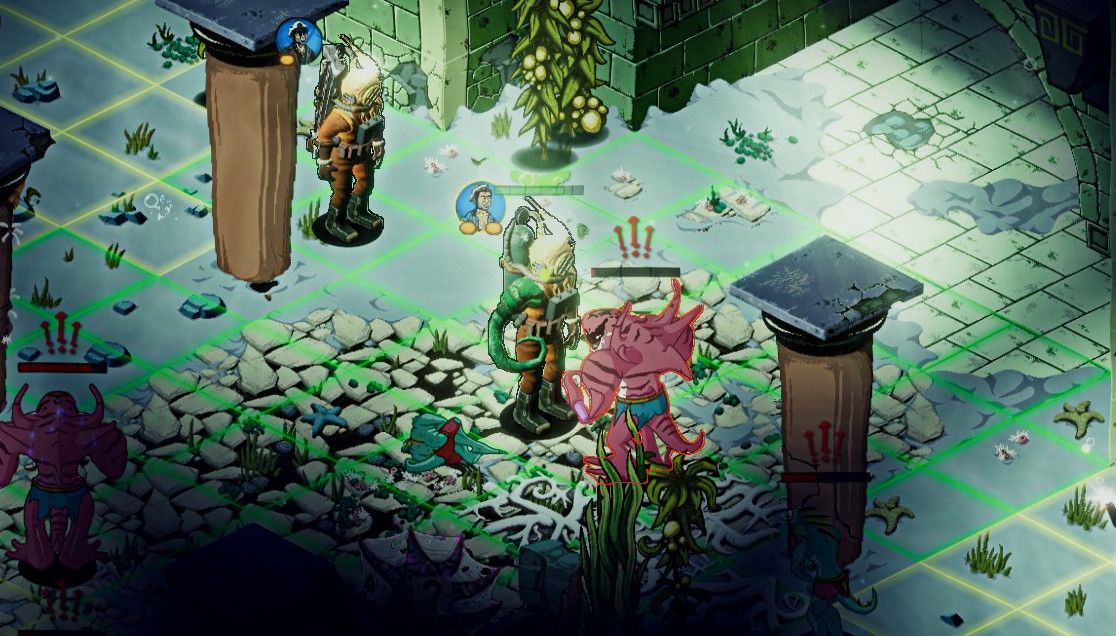 We said in 2018 that it’d be swell if game developers would ease up on the Cthulhu mythos and put some effort into other kinds of horror, and I think that position still stands. That doesn’t seem likely to happen anytime soon, though, and once in awhile a game featuring faces with too many tentacles comes along that looks like it might be different enough to be interesting. Stirring Abyss, a strategy-RPG about a submarine that’s run into a spot of trouble at the bottom of the ocean, might be one of them.

Being developed by a three-person Finnish studio calling itself Sleepy Sentry, Stirring Abyss is based on The Temple, a 1920 short story by HP Lovecraft about a German submarine that comes to grief during the First World War. In the game, it’s the USS Salem that sinks to the bottom of the ocean during the early years of the Cold War, after which it falls to you to take control of the surviving crew, figure out what happened (and what’s going on with these mysterious underwater ruins), and ultimately—hopefully—escape.

There’s an element of XCOM to the game when you’re exploring outside the sub, with turn-based movement and combat against an array of undersea weirdos determined to do you harm. Your weaponry is very basic—daggers and spearguns and the like—but as the story progresses, you may also be able to subject your crew to “powerful but grisly mutations” that will increase the odds of their survival, at the cost of their humanity.

Scavenging resources scattered across the seabed will be necessary for crafting weapons and supplies, and also for repairing and upgrading the Salem, which will serve as your undersea base. Naturally, there’s also a sanity mechanic: The horrors of the deep black sea will take a toll on the crew, and while some psyches will be strengthened by the ordeal, others will break.

I took a pre-release build of Stirring Abyss for a spin recently, and while it’s still rough around the edges, I really dig the way it embraces the aesthetic of the subject matter. The audio is thick and ominous, and the pulpy art style is a good fit: Publisher Slitherine said Stirring Abyss is meant to be weird rather than scary, “inspired by classic board games and traditional RPGs,” and it definitely has that look.

Combat in Stirring Abyss, at least as far as I played, seems simplified compared to full-on tactical games (and could use some tweaking—it’s way too easy to die at the hands of enemies you can’t see) but the story is really what makes it interesting, and the need to preserve oxygen when you’re outside of the sub can force some tough choices: Do you push out into the darkness in hopes of discovering secrets and supplies, or play conservatively and risk missing out on what might keep you alive?

This will be the second game to come out of Slitherine’s K-Project, an initiative aimed at helping small indie projects reach larger audiences, following Tactical Troops: Anthracite Shift, which is expected to launch later this year. “Last year, we saw more than 9,000 games debuting on Steam alone. K-Project is our way to help indie strategy games to be seen; our act of love to remember where we started and help others with the same dream,” marketing director Marco Minoli said.

Stirring Abyss doesn’t have a release date yet, but is now listed as “coming soon” on Steam. To learn more, take a look at some screens below and then hit up slitherine.com.