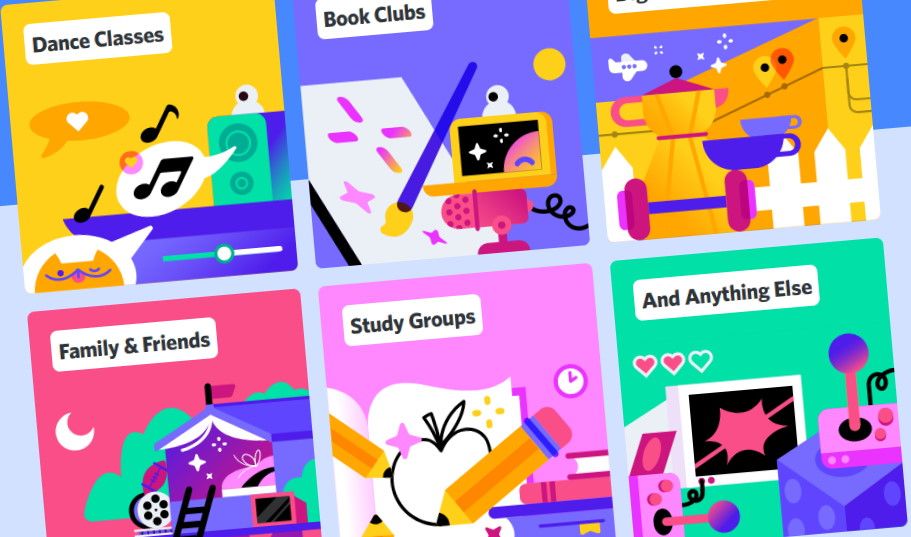 Online text and voice chat application Discord originally launched with a sole focus on videogames and the people who play them. It even took a shot at its own digital storefront and game subscription service. But today Discord announced that it’s aiming to become a more general-purpose communications platform.

“We designed Discord for talking. There’s no endless scrolling, no news feed, and no tracking likes. No algorithms decide what you ‘should’ see,” Discord founder and CEO Jason Citron wrote. “We designed Discord to enable the experience and feelings we wanted to recreate: being together with your community and friends.

“As you’ve used Discord for more and more than playing games, our branding didn’t keep up, and the way we talked about ourselves sent the wrong signal to the world, making it harder for you to bring your broader community on Discord. And we know that the first few interactions someone has with our service could be intimidating because Discord is complex with many features.”

To cut back on that complexity, Discord says it has “streamlined the new user onboarding experience,” and added new server templates to help simplify the process of setting up new servers. Bugs have been fixed, voice and video capacity have been increased, reliability and performance remain Discord’s “top priority,” and a recently launched “Safety Center” is in place to make users aware of the rules and tools available to deal with unwelcome interactions.

There are also some more obviously front-facing changes. The Discord website has changed—discordapp.com is out, discord.com is in—and so has the tagline, which is now “Your place to talk.” Gaming now rates all of two mentions on the front page, neither of them prominent, and the “jokes and references” within the software have been made less specific to gaming, “to make sure everyone can take part in the fun and make Discord more welcoming.”

Discord’s expanded ambitions make sense given the ongoing COVID-19 pandemic, which has pushed conferencing software like Zoom to the forefront of mainstream consciousness. It also prompted Discord to increase its streaming viewer limit in March, from ten to 50, to accommodate increased demand.

It will never not annoy me that I can’t have multiple channel windows open simultaneously, but on the whole Discord is a very simple and solid application, and if it can shed its “gamers only” image, this would be the ideal time for it to go mainstream.