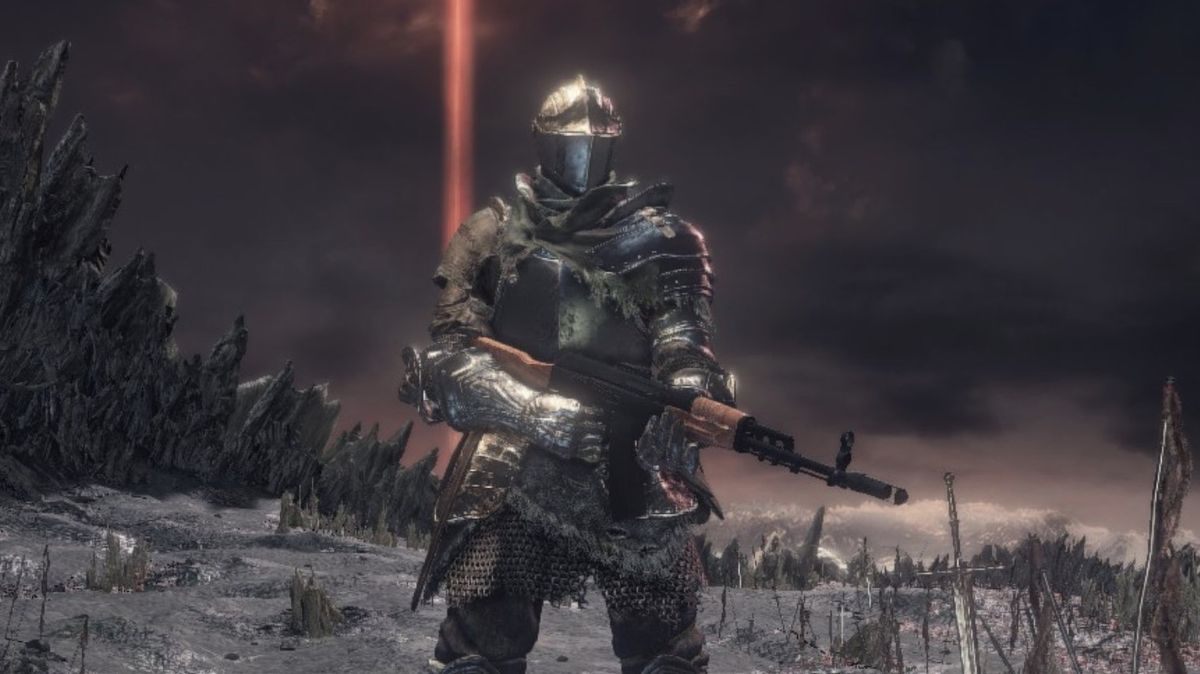 I’m not one of those Dark Souls people that goes on and on about the creator’s vision and the intended experience to justify the steep challenge of From Software’s games. Play them that way if you enjoy playing them that way, totally cool and good and fun.

But if your style is something a little faster and looser, just mod a whole bunch of guns into Dark Souls 3 and play it like Call of Duty: Tragic Yet Dignified Dragon Warfare. It’s the ideal easy mode for FPS players looking to try out one of these wacky RPGs the kids won’t quit talking about these days.

Modern Firearm is a Dark Souls 3 mod that replaces all the default ranged weapons with, well, automatic weapons. Modder Asasasasasbc [sic] knows it’s completely broken and unbalanced, but that’s the big idea anyway. Subverting the infamous difficulty of a subdued, morose action RPG with the brashest of videogame weapons is modder poetry. Check out the big guns in action in the video below.

Every weapon (expect the sniper rifle) has alternate firing modes, too. Handling the weapon with two hands results in automatic fire, which causes less damage per shot and reduces accuracy, but at a lower stamina cost. Handling firearms with one hand enables the semi-automatic firing mode, which gives projectiles higher damage and accuracy, but at a higher stamina cost and slower firing rate.

Besides some pretty decent gun models, the mod adds in some new sound and graphical effects to really sell the goofy illusion. A more apt comparison than Call of Duty might be Resident Evil, because most of the models are based on guns from that series, made three-dimensional by DeviantArt user Adngel.

For a real Flintstones Meet the Jetsons look, download Asasasasasbc’s Leon Kennedy armor mod too. It replaces the Fallen Knight set with the skin, bones, and RPD attire of Leon from the Resident Evil 2 Remake.

Important note: Installing everything via the Dark Souls 3 mod engine is a good idea since it blocks the game from connecting to the network, which otherwise can result in a ban. Mods are a no-go in online play. I mean, rolling into the Irythill PvP arena with an AK isn’t exactly fair play.

Here’s what you’re trading in for what with the Modern Firearm mod for Dark Souls 3:

The projectiles are still arrows, but the higher fire rates and sound effects do the trick for me. I powered through Dark Souls 3 for review four years ago and haven’t been back often since, a little too stressed and tense these days to throw myself at Sister Friede another thirty times with the ol’ sword and board. But with an M16? Parry this, you filthy animal.

If you’re looking for a reason to revisit Dark Souls with renewed challenge, give the Cinders mod a try. Emma dug into what makes it so special a few months back, and I’ve heard from several Souls-heads that it’s the ideal version of the game. Me? I’ll be packing heat for now, and no, that’s not a bonfire in my pants.