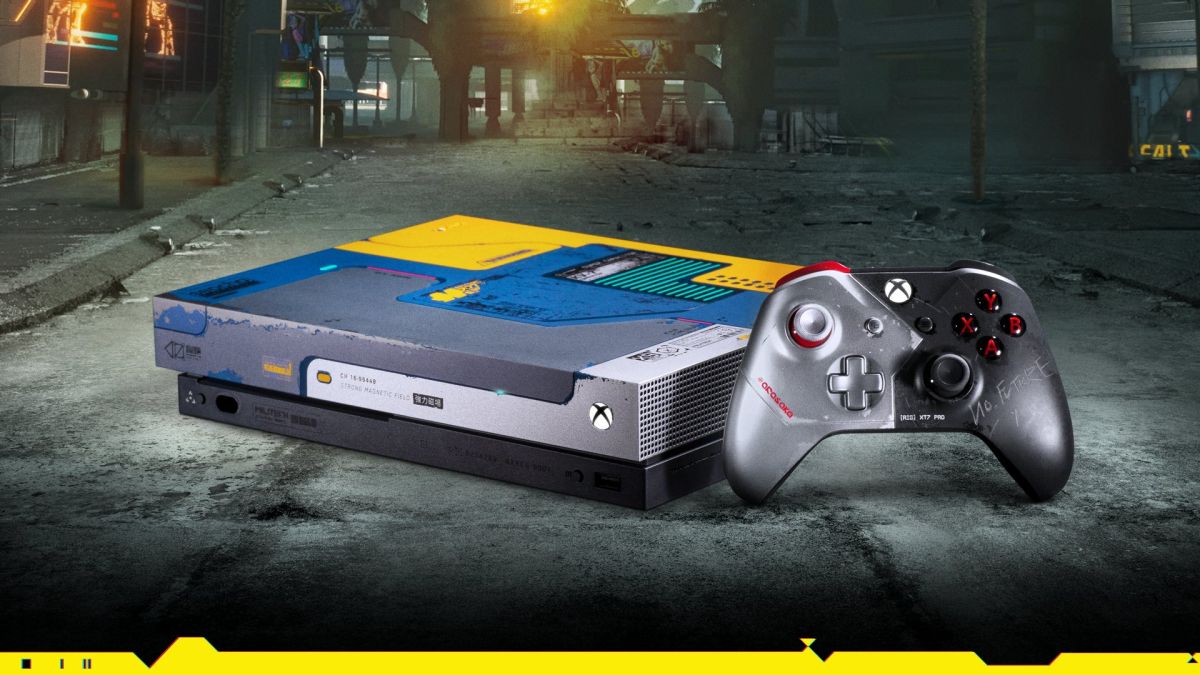 In an ideal world we’d all be playing Cyberpunk 2077 right now—it was originally down to be released just under a week ago (16 April 2020). We now won’t see the game until 17 September, by which time we hopefully won’t need an all-encompassing dystopian future to bury ourselves in, we’ll just be electing to do so instead. Still, that hasn’t stopped Microsoft, Seagate, and Steelseries from releasing Cyberpunk 2077 hardware.

The big one here is the Xbox One X Cyberpunk 2077 edition, which… doesn’t look that great. Rubbish even. The worn out dystopian vibe is all present and correct, but it just looks like a badly painted last generation console. You have to wonder who would pick up such a thing as well, as surely anyone that is interested in an Xbox One X has already done so. Maybe it’s to inspire people to paint their consoles? It won’t be available until June 2020 by the way.

The control on the other hand is at least more interesting (although, confession time: I absolutely hate all controllers, because a keyboard and mouse is clearly superior in every way. No you can’t change my mind.) But aesthetically at least, it works much better. It’s got that retro futuristic feel down beautifully.

And then there’s the Cyberpunk 2077 Headset line from Steelseries, which comprises the Arctis 1 Wireless for Xbox, Jonny Silver hand edition and the Arctis 1 Wireless Netrunner Edition (for us PC users). There are a couple of booster packs that cover off the other factions in the game as well—Arasaka, Kang Tao, and Militech.

To be fair to Steelseries, it knows a thing or two about audio, and has topped our best headset guide for a while now with its Arctis 7, so of all the branded gear being announced at the moment, this is the one that is probably the least naff. But still it’s going to be strapped to your head, and you won’t see it that much, so I’m not sure what the branding does for you.

Finally (for now at least, there’s clearly a lot more of this , I mean gorgeous branding, to come), we have a Cyberpunk 2077-themed drive from Seagate. Nope, you read the right. A hard drive. Actually, scratch that, it isn’t a hard drive at all, it’s a ‘game drive’. It comes in 2TB and 5TB versions and it’s clearly going to make the game better somehow when it does finally land. Guess what, it’s got a splash of yellow on it too. And some numbers and dots.

I’m beginning to get a nervous tick about the Cyberpunk 2077 yellow, and the game isn’t even due out for another five months.