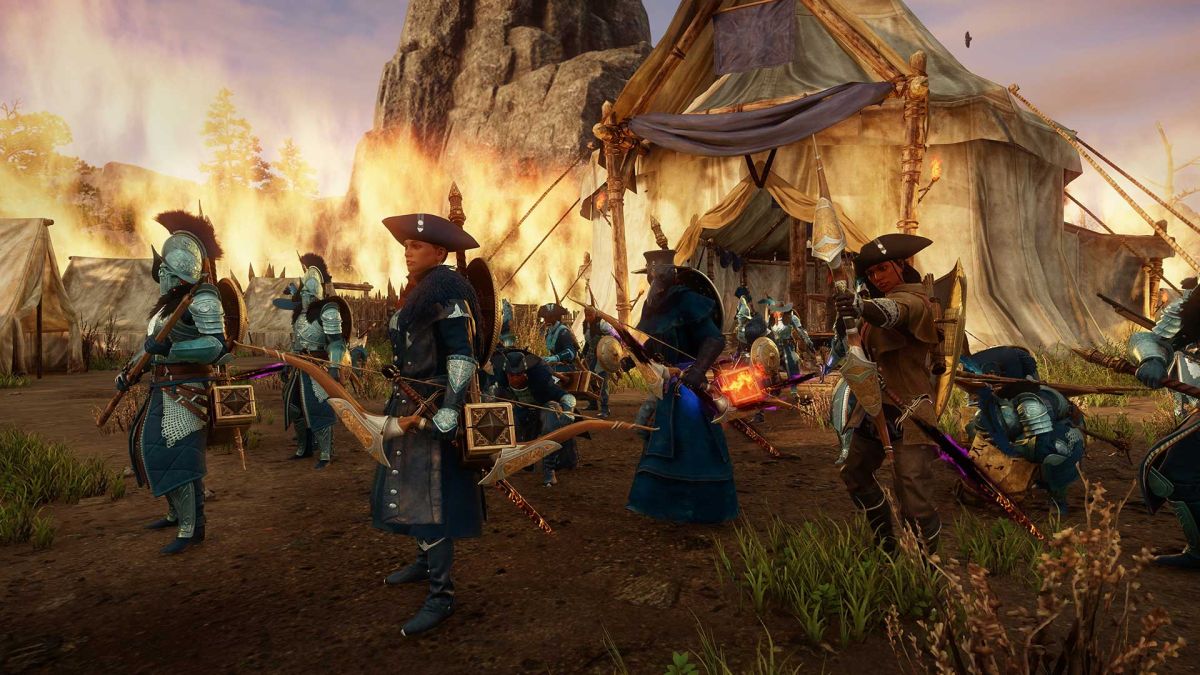 One of the big attractions in Amazon Game Studios’ upcoming MMO New World is called War Mode, a PvP mode that pits players against one another in large-scale battles for control of territory. It’s a relatively complex, multi-stage affair that begins with completing Faction Missions in order to weaken a territory enough to declare war against it, and culminates in an all-out 50v50 battle for control of the territory’s fort.

Attacks on forts are essentially control-point battles: Attackers must capture three “Rally Points,” each one bringing them closer to the fort, while defenders do their best to keep that from happening. Once all three Rally Points are taken, attackers will go to work on the gates of the fort, and when they’re breached, will launch a final assault on the fort itself in order to claim control of the territory.

Adding to the action are “siege weapons,” available to both sides of the conflict, which bring an elevated level of firepower to the fight. Attacker siege weapons, including cannons, mortars, and repeaters—basically a medieval minigun—can be purchased using Battle Tokens, while defensive weapons, including ballista, explosive cannons, a repeater turret, the buff-granting Horn of Resilience, and my favorite, the Fire Dropper—a vat of boiling oil—are free but will have power levels determined by how they’ve been upgraded prior to the war. Traps are also available to both sides, to keep everyone on their toes.

This page at newworld.com explains the system in detail, but earlier today Amazon Game Studios showed the mode in action in a couple of rounds played for IGN’s Summer of Gaming event. Control point gameplay isn’t anything new, but the battles appeared frantic and crowded, and objective-based PvP can be a lot of fun: New World may not be breaking major new ground here, but sometimes you just want to get together with friends and bludgeon each other with hammers for awhile.

New World is set for release on August 25. Preordering the game will also get you access to a closed beta which will get underway on July 23.