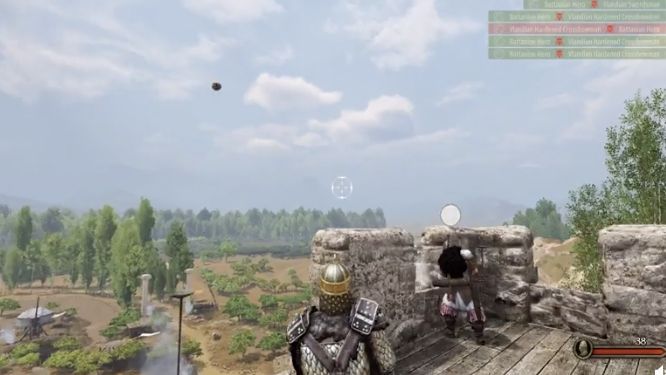 I suck at Mount & Blade 2: Bannerlord’s sword combat, but nailing dudes with arrows and javelins I can do. Like in Tribes: Ascend and its predecessors, predicting where the arc of a missile will intersect with the face of a moving target can make you feel like you’ve tapped into some superhuman intuition. Plus, if they’re on a horse, you get to watch them flop off of it, which makes Bannerlord’s ranged combat even more fun.

I have a feeling that surprise and trick headshots are going to be a thing with Bannerlord, sourced both from multiplayer and singleplayer. They’re just so good.

Here’s one from Mr. DingusDong in which the poor victim’s horse is already going down before a padded spearman skewers his brain:

Headshot of the year nomination from r/mountandblade

The crème de la crème of Bannerlord headshots so far, however, comes by way of trebuchet:

The trebuchet is for destroying walls not making headshots! Trebuchet operator: Hold my grain from r/mountandblade

I love everything about that video: The tension as the rock hangs in the air. The sound effect when it connects. That it bounces. That it then plops onto the floor. It’s just a top tier bonk.

The same kind of thing from the other direction isn’t as fun to watch, but the sound effect is satisfying nonetheless:

Finally, I’ll give some credit to xXJightXx, both for the commitment to the 2004 username and for this series of villainous throws:

Alright, that one feels a bit too mean to be funny. Still: nice throws.

If you have any ace kills of your own to share, drop them in the comments. If you’re not playing Bannerlord and want to know more—and who could blame you after seeing that trebuchet bonk—here’s why we think it was worth the wait.