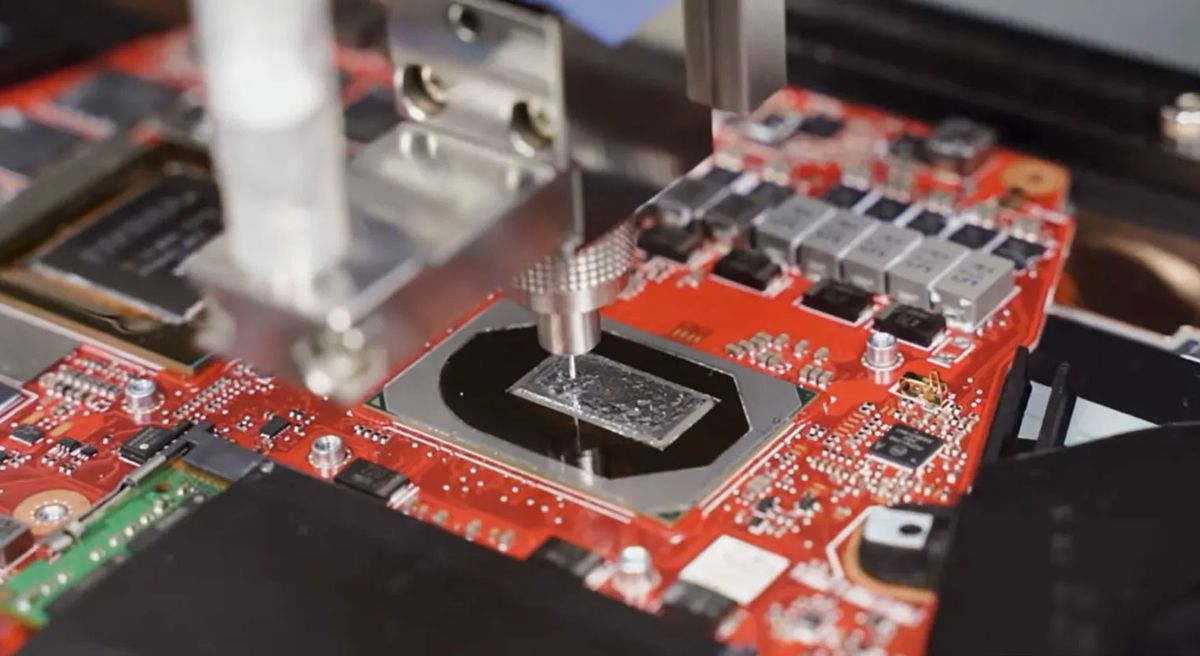 Some thermal interfaces (the all-important goo between your CPU and heatsink) are easier to apply than others, and liquid metal typically requires careful application by hand. For that reason, it’s not often found in mass assembled laptops, but Asus came up with a way to automate the application of liquid metal, and will be including it in upcoming ROG gaming laptops.

Regardless of the type, thermal compound is designed to fill in the microscopic nooks and crannies in the surfaces of the heatsink and your processor’s integrated heatspreader. It’s also conductive, and makes more efficient work of transferring heat from the CPU to the cooler.

Liquid metal is a favorite among some overclockers, particularly those who ‘delid’ their CPUs—the delicate practice of removing the heatspreader and applying compound directly to the die. Asus is not delidding the mobile CPUs in its ROG gaming laptops, but is using a “proprietary process and machine” that is capable of applying liquid metal at scale.

Will it really make a difference? That remains to be seen, though Asus claims it is seeing a meaningful reduction in temps by switching to liquid metal.

“Liquid metals have low melting points that render them fluid at room temperature. These alloys are highly conductive, so they’re extremely effective at transferring thermal energy between surfaces like a processor die and heatsink. The benefits are well-established in overclocking and DIY circles, and internal testing reinforced the appeal for gaming laptops. Our engineers observed a 10~20C reduction in temperatures depending on the CPU,” Asus explains in a blog post.

Asus says it’s using Conductonaut from Thermal Grizzly, a popular option among overclockers, but chose not to partner with the company to keep the project a secret.

“There are different kinds of liquid metal on the market. We use Conductonaut from Thermal Grizzly because it has a lower concentration of tin, which isn’t as conductive as the gallium and indium that also make up the alloy. Rather than working closely with Thermal Grizzly like we do with other partners, we purchased initial quantities more casually to keep the project a secret. Not even Intel knew of our plans during development,” Asus says.

I feel like Asus is flexing a bit, but it’s an interesting glimpse into the business. I’m mostly intrigued by the actual application process Asus designed. It’s a two-stage method that begins with a mechanized arm wetting its brush in a container of liquid metal, and then gliding it back and forth across the CPU. I’m reminded of Daniel LaRusso painting Mr. Miyagi’s fence, minus the stealth karate lesson. There is even a slight arc to the movement to mimic human motion, with the mechanized arm making precisely 17 passes.

According to Asus, this method is not feasible for AMD processors. Intel CPUs have a restricted area around the the die that is free of capacitors and the sponge “neatly fills this space.” But on “other processors” (eg, AMD Ryzen), surface mounted circuitry can be found in the same space and would short out if liquid metal was applied to it.

Asus says ROG laptops with liquid metal will be available sometime this quarter.