An Oregon music festival lives on as a surreal and charming MMO, this weekend only 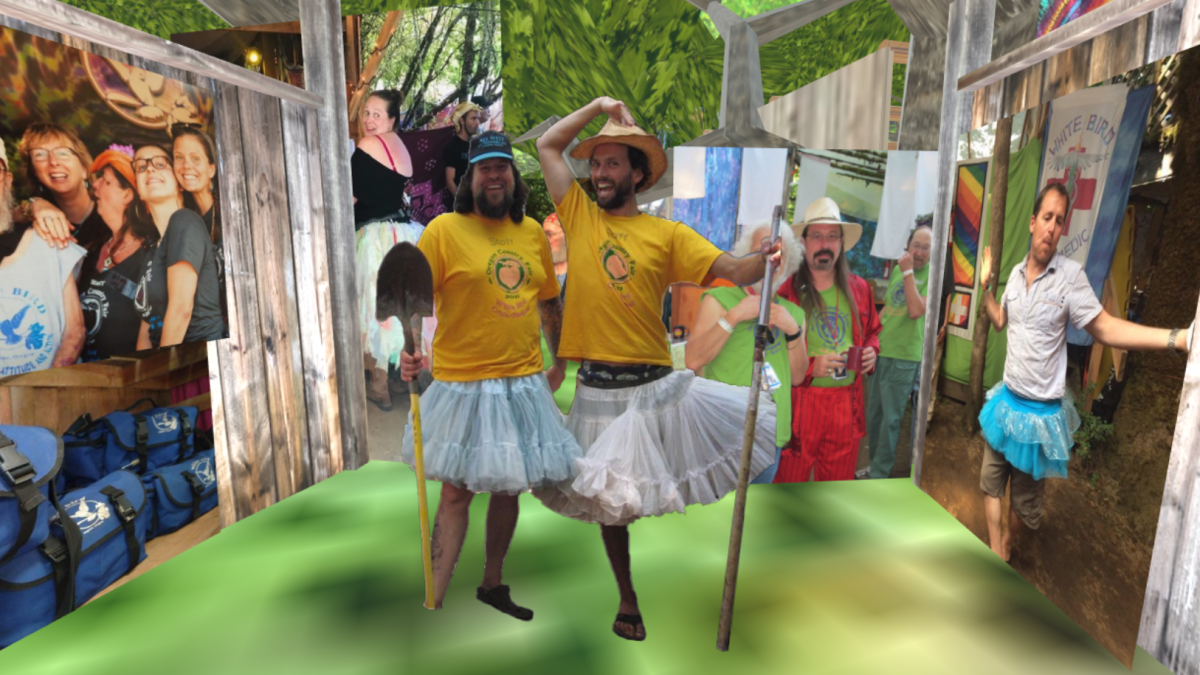 Nearly every summer for more than 50 years, thousands of people have gathered in Veneta, Oregon, a little town 13 miles west of Eugene, to party. The Oregon Country Fair is an annual art and music festival with an eye to the region’s history of counter-culture movements and environmental activism, staged as a non-profit, family friendly affair. But, as with most public events, the Oregon Country Fair was cancelled this year due to the rapid spread of COVID-19.

Cancelled in person, at least.

The Oregon Country Fair in the Clouds is the festival’s first virtual showing, but it’s not just some simple webcast. The entire outdoor venue, multiple stages and walkways strewn about the Oregon forest, have been recreated in glorious low-poly—a wholly volunteer effort. We’re talking bulky cauliflower trees and blurred swatches of grass and dirt that look straight out of Everquest. And you can explore the whole thing in first-person.

Performers are streaming their sets into virtual screens nested in each scene while attendees wander and congregate around stages, chatting openly. Yeah, mics are hot and on by default, but you can block anyone causing a ruckus. That’s a nice upgrade from the usual concert setting, honestly.

You can ‘attend’ for free from your web browser too, Oregon local or not. There’s no need to download a client, just an internet connection and a computer capable of spitting out some primitive 3D graphics. Head to the festival portal and you’re instantly there.

There’s music, dancing, craft workshops, and talks happening all weekend, so get in while you can. It’s worth checking out if only to chat with other attendees or just wander around to check out the wild multimedia collages that make up the festival’s eerie, but surprisingly cozy facsimile.

I got lost on the way to the Peach Stage, stuck in Xavanadu among the artisan booths while trying to find the chase down a variety show. I heard some guy was doing bubble tricks. But I didn’t mind getting lost. The Fair in the Clouds is an endless, surreal delight. Stands from the actual fair have been recreated, people and all, out of those 2D cutouts. Some stands are actively attended to by the artisans themselves.

I didn’t ever find the bubble guy. I ended up teaching an orb named Butt Chakra how to fly and listened to one of the festival curators talk about the how some of the regular artisans wanted ‘their usual spot’, sometimes as specific as setting up next to their favorite tree. All the buskers, the puppeteers, and circus performers typically marching along the trails on stilts under the guise of grinning beasts are still there, albeit in rigid 2D cutout form. The only thing missing is the smell of sweat and food swirling together in the summer heat.

From my short stint living in Eugene, I’m just absolutely delighted by the Fair in the Clouds. As simple as this virtual recreation is, it’s an admirable community effort to keep the spirit of the show alive.

You can check out the schedule here, which details everything happening in the Fair in the Clouds from July 10 to 11.  Have fun and stay hydrated out there.