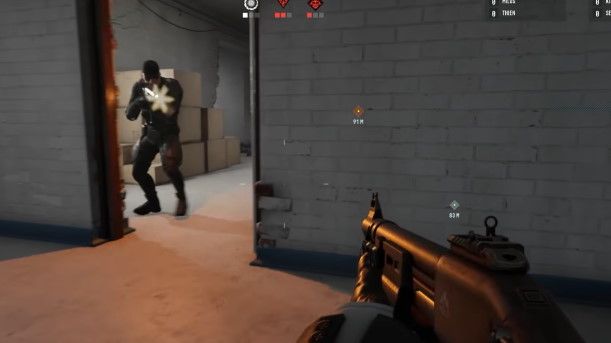 The team-based tactical shooter Nine to Five was announced at The Game Awards last year by Redhill Games, a studio launched in late 2018 by former Remedy Entertainment CEO Matias Myllyrinne. It promised to prioritize teamwork over twitch reflexes: Myllyrinne said that the game will challenge players “with creative new mechanics to bring back that classic feeling of playing with friends, finding your role, and working together to outplay the competition.”

Today the studio revealed a little bit about how it plans to go about making that happen with a new gameplay trailer that also signals the upcoming start of a closed alpha test. There’s a clear element of Rainbow Six Siege to the game—you can place barricades, and at one point there’s a reference to motion sensors—but the map in play is much larger and more open, and the objectives seem more varied and deep: In the video, Team Friday has to collect codes in order to hack a vault, then choose an escape route and successfully extract.

The ability to shoot straight is obviously still a priority here, but bigger maps and complex objectives might help clear some space for players like me, who love to hose bullets but aren’t particularly good at getting them to go where they’re supposed to. Nine to Five is also taking an unusual approach to team and match composition: Each match is a 3v3v3 battle that will unfold over three phases, with each phase impacting the setup of the next. Matches will also be relatively brief, with an estimated playtime of about 15 minutes from start to finish.

If you’d like to see what it’s all about at this stage of development, a Nine to Five closed alpha test is set to begin on June 4. Myllyrinne said there will likely be “plenty of rough edges” during the test, but promised that the studio will “be engaging closely with the community for your feedback on day one.” To sign up, or to just learn more about the game, head over to ninetogive.game.