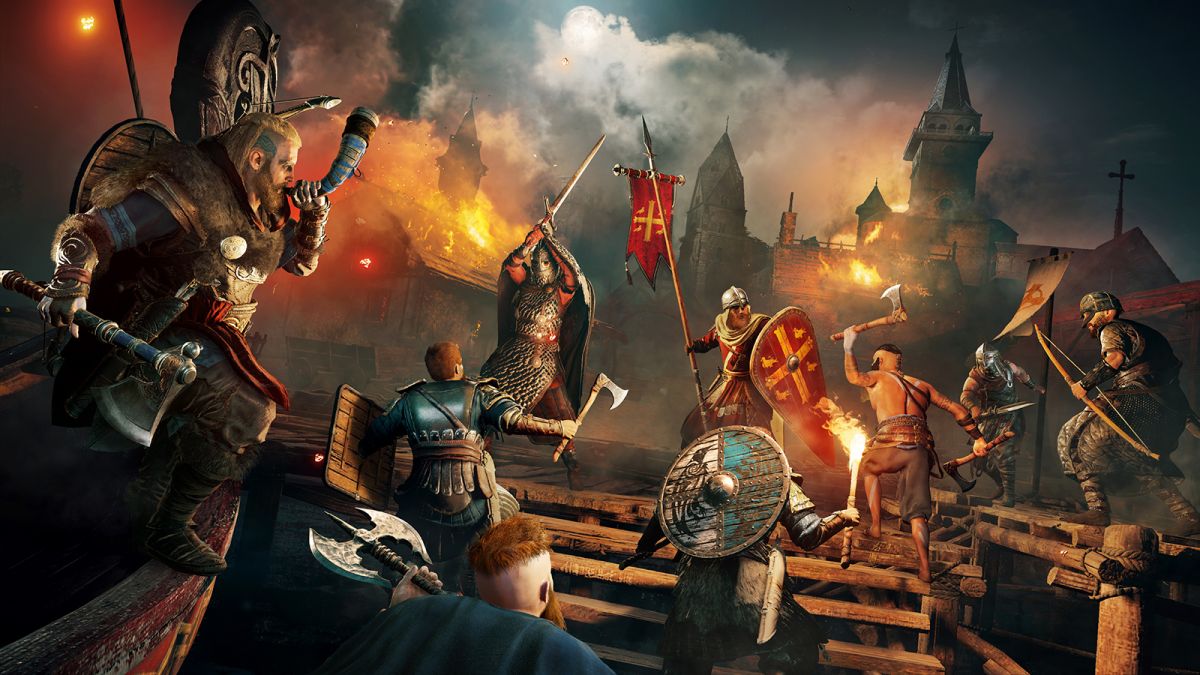 While we’ll have to wait until July 12 and the Ubisoft Forward event to get anything more official about Assassin’s Creed Valhalla, half an hour of leaked gameplay footage is doing the rounds should you feel the need to see what is labeled “WORK IN PROGRESS”, complete with NPCs standing around doing nothing in the middle of a fight and some animations that don’t look quite final.

Should you head over to Reddit to find links that haven’t been taken down yet, you’ll get to see a quest that involves uniting the folk of East Anglia to assault a castle held by one of the bad Vikings. Which you do with the aid of one of the good Vikings, who provides you with longships. While the interface, inventory, and much of the combat still seem a lot like Odyssey, there are some differences. Riding a horse through Northwic has a very Witcher 3 vibe to it, and I immediately flashed back to riding through Velen to see the Bloody Baron. There’s a cinematic camera option that’s a bit Red Dead Redemption, though it makes you bump into every other rider on the road—another sign this is early footage.

After fighting some wolves and gathering together Anglo-Saxons who have been shown the violence inherent in the system by their Viking oppressors, an assault begins. It opens with longboats in a storm being fired on by burning arrows as they approach the castle walls. A boat full of what is presumably gunpowder deals with the stone walls in a battle of anachronism versus anachronism, after which Eivor and her troops fight through successive gates.

While the combat is familiar, even featuring a version of the Spartan kick, it does include the ability to stomp fallen enemies and grab fallen weapons to yeet at enemies, just like in the trailer. There’s also a special ability that hurls handaxes at multiple opponents, catching allies as well a couple of times.

The climax is a boss fight with a Viking named Rued and his hunting wolf, after which there’s a moral choice moment where you can spare him or finish him off. Then we get to see the inventory, which allows for hiding certain gear if you don’t want your helmet to be visible, and the skill tree which appears as a constellation of stars, like in Skyrim or Grim Dawn or probably several other games I’m forgetting.

There’s a little bit of climbing and a tiny bit of raven vision to remind you those things are in there. It all looks quite familiar, as expected for a tentpole Ubisoft release—the kind of thing people will happily sink 100 hours into then be unable to remember a year later.

Last we heard it’s got a release date of “Holiday 2020.” Here’s everything we know about Assassin’s Creed Valhalla.